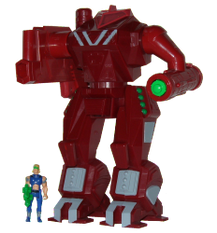 The Summoner is a 70t clan omni mech. The Summoner earned the Inner Sphere code name Thor for its powerful, yet simple arsenal. The Summoner's balanced mix of speed, mobility, armor, and firepower make it a highly effective and reliable OmniMech. 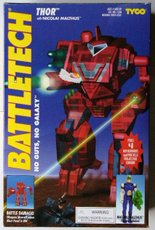 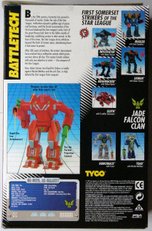 The Box art is depicting the red Thor piloted by Nicolai Malthus, the main villain of the animated series. The computer rendered image ( state of the art in 1994) of the Thor looks quite cool on the dark blue box. But at first glance you notice something odd with the cockpit. 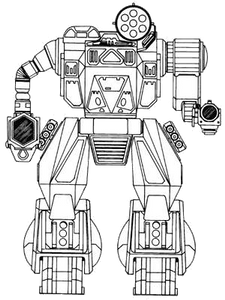 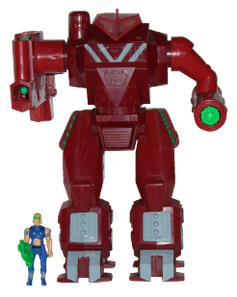 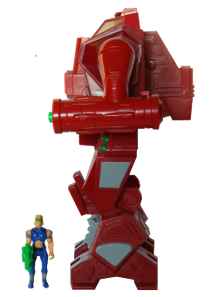 In a direct comparsion between the animated series Thor and a pictue from the Battletech Hardware Handbook you clearly see the difference. The cockpit should not be in the center, it should be located to the right. Although Nicolai Malthus is piloting a M version othe Summoner / Thor which is missing the large LRM launcher on the left shoulder the cockpit would still be located on the right. 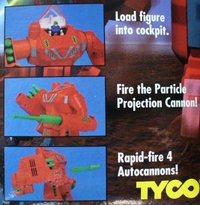 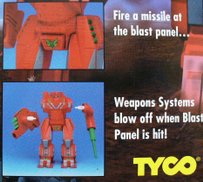 All Tyco Battletech figures come with action features and so the Thor is no exception. In fact the toy is quite packed with them. The right arm is equipped with a pistol like missile launcher which fires the four green plastic rockets in quite a fast progression. This simulates the autocannon on the real thor. The punch is quite decent, 3 meter shots are no problem. The right arm features the PPC and here the action mechanism consists of a telescoping stick which swings out after pressing the button. Again here you have quite a force and the stick can easily knock off most of the other toys from the series.

One of the most interesting parts about the Thor is the battle damage feature. A hit of the blast panel triggers an explosion mechanism and both weapons are ejected from the torso, rendering the Thor useless. The blast panel is located in the lower torso between the legs, every man can understand why a hit in such a region causes such drastic consequences. Damn that hurts even when thinking about it. 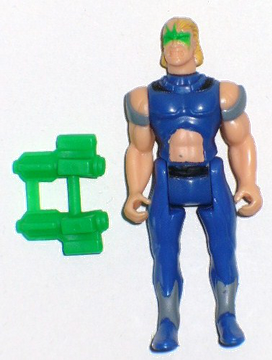 All Tyco Battletech vehicles include drivers and so the Thor is no exception. It comes with Star Colonel Nicolai Malthus, 2.5 inches tall, with five points of articulation and a handheld weapon. The figure of Nicolai Malthus is a quite fitting apaption of the figure in the animated series bearing in mind the small scale. There are four different Malthus figures in the line because the figure is also used as the driver of the Toad, although we all know that no Mecharrior could pilot an Elemental Suit. Yes all Battletech pros will now point at Kai Allard Liao, but the Solaris Champion piloted a heavy modified Elemtal Suit during his fight, together with Clan Jade Falcon forces, against Comstar on Alyina. The Thor comes togther with the blue Malthus figure which can easily be confused with the purple painted figure which comes with the first Toad.

The Thor is a must have for fans of the Tyco Battletech line. First of all because it is the signature mech of the arch villain and also because of the awkward blast feature.The toy is a quite accurate implementation of the model in the animated series. This is good and bad at the same time. The recognition value of the box art and animated series compared to the toy sure is positive, but for adult collectors in the Battletech universe the mech seems a bit too cartoonish. 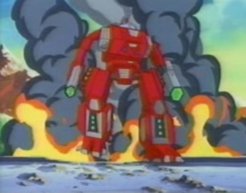 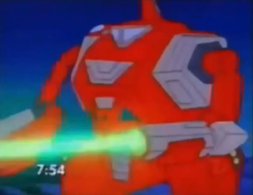 NEITHER THIS WEB SITE, NOR ITS AUTHOR ARE RELATED TO OR REPRESENTATIVES OF TYCO. ALL IMAGES PRESENTED ARETHE PROPERTY OF THEIR RESPECTIVE OWNERS AND ARE PRESENTED HERE FOR INFORMATIONAL AND ENTERTAINMENT PURPOSES ONLY.